Los Angeles Int'l Airport is an airport made by Beastiness, TheOfficialAxe, Andrew_Jolteon, and many others. It is currently under construction.

Los Angeles International Airport is considered a mega-airport because of the large amount of airlines that serve there and because of its overall size, which also makes Dallas/Fort Worth Int'l Airport and Atlanta-Hartsfield/Jackson Int'l Airport, as well as Chicago-O'Hare Int'l Airport all mega airports.

Los Angeles International Airport is also the ONLY airport in the US that is a hub for all 3 major US carriers and is also the ONLY airport in the US to have a direct gateway to Australia, and is one of three airports in North America to have a gateway to Australia, the others being San Francisco Int'l Airport and Vancouver Int'l Airport. The major SkyTeam members at the airport are Delta Air Lines, West Coast Airlines, Air France, Korean Air, and Aeromexico. The major Star Alliance members include United Airlines, Air New Zealand, and All Nippon Airways, which tends to be the second busiest asian airline at the airport, only behind Korean Air.

An automated people mover project is currently under construction to help with circulation around the airport, as like the rest of the city of Los Angeles, it is a headache to get around due to all sorts of traffic congestion issues.

Los Angeles International Airport has a shocking amount of airlines that have either hubs, focus cities, or their headquarters for US, or even North American, operations for the North American market.

Los Angeles Int'l Airport is the biggest hub for Jolteon Airlines. The airport is also the only airport in the entire United States where all three legacy carriers (American, United, and Delta) all have hubs at. Alaska Airlines also has a hub here as does West Coast Airlines and Eternal Airlines. The airport serves as a focus city for Air New Zealand, Qantas, Allegiant Air, Southwest Airlines, Xbox Airlines, and Volaris. Qantas also has a maintenance hangar at the airport where it does aircraft repairs. Qantas has also planned on adding a few key destinations to link its network from its main base Sydney via LAX, just like how Air New Zealand does with London-Heathrow, Air France does with Papeete, and Arounon Airlines does now with Santiago, Buenos Aires, and Rio de Janeiro.

The airport also has the most common occurrences of Airbus A380 operations in the entire Western hemisphere, with Qantas, British Airways, Air France, Korean Air, Asiana Airlines, Thai Airways, Emirates, Singapore Airlines, China Southern Airlines, and Lufthansa all operating A380 flights. Jolteon Airlines also uses LAX as its main base for A380 operations, with Miami also having some. Jolteon Airlines also in the past used A380s out of its South Park and Quahog hubs before moving these back to LAX due to not enough seats being filled up. 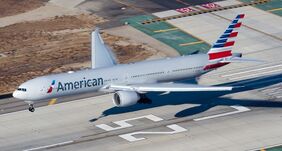 A United 757 taking off at LAX 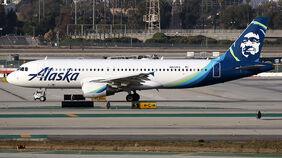 An Alaska Airlines A320 at LAX 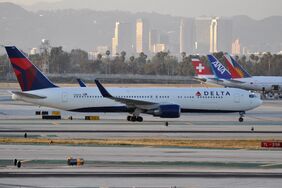 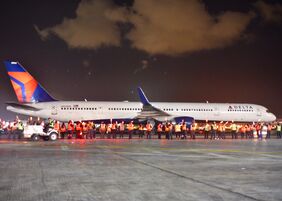 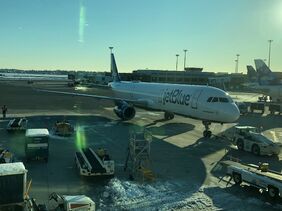 A JetBlue A320 at the terminal 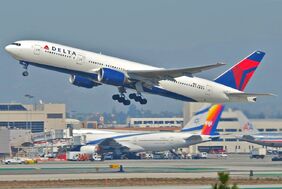 Is LAX the largest airport in the ROBLOX world?

Even though it has 4 runways and 9 terminals, there could be another airport that is bigger than LAX. For example, ORD and ATL. However, people also speculate that LAX is the largest airport built on ROBLOX due to how many maximum-sized baseplates it uses.

Still proof that LAX might be the largest airport on ROBLOX. ORD only has 5 terminals and ATL only has 2 terminals.

Terminal 1 is the first terminal to the right and it solely serves Southwest Airlines.

Terminal 3 is exclusively served by Delta Air Lines. It is located right next to the Tom Bradley International Terminal.

This is where ALL of the international flights outside of North America are at, unless otherwise stated.

Retrieved from "https://the-roblox-airline-industry.fandom.com/wiki/Los_Angeles_Int%27l_Airport?oldid=28520"
Community content is available under CC-BY-SA unless otherwise noted.